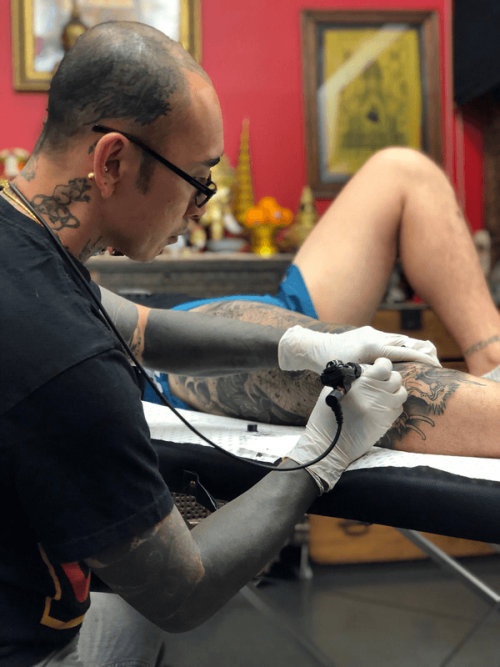 Japanese tattoos are famous for their motifs that range from Seasonal flowers tattoos to Koi tattoo. However, we are curious about what does all this symbolism means? Knowing what they mean is just as important as making sure that they are beautiful. In this article, we’ll explain three of the most common motifs and discover what they mean in terms of culture, tradition, and perception.

The dragon is unarguably one of the most iconic tattoos and associated with Shinto, Folklore and East Asian art. Dragons, for the most part, represent wisdom, fortune, and courage. They signifies water & wind and, mainly illustrated with waves in most of the traditional Japanese tattoos. One distinction between a Japanese and Chinese dragon is that the latter has five toes while Japanese dragons have three.

The Koi fish is a staple in many traditional tattoos as they symbolize determination, luck, hard work, and success. Koi inked in many distinct colors, each emphasizing a particular trait. Often, Koi inked in the form of water element and depicted by swimming against the current. Though a Koi swimming in a downstream direction has a different meaning, which is overcoming obstacles. Generally, Koi tattooed with sakura or some lotus flowers.

Sakura : A five petal pink flower, also called cherry blossom, symbolizes spring. It is considered a symbol of life which is finite by design in the grand scheme of the world. Usually, Sakura illustrated with water or wind with some creatures.

Chrysanthemum : It is seen as a symbol of autumn because that is when this flower blooms. It represents perfection and longevity, which is also why it is the symbol representing the Imperial throne of Japan. While there are many different types of chrysanthemum, the one depicted in Japanese tattoos happen to be very large with narrowly shaped petals which move upwards from the dead center.

Lotus : The lotus represents a strong associations with the Buddhist religion, and it is not just in Japan but in all countries where Lord Buddha is considered a teacher. Lotus is a symbol of rebirth, wisdom, transformation, purity, beauty, elegance and enlightens. Often Lotus tattoo carved using different colors, in conjunction with the dragon or other flowers.

If your interested in getting a Japanese tattoo sleeve, be sure to check out Marc Pinto’s work. He is the Specialists for Japanese tattoo in Perth and has work in Japan at Hori Hiro’s tattoo studio numerous times.

View all posts by admin →